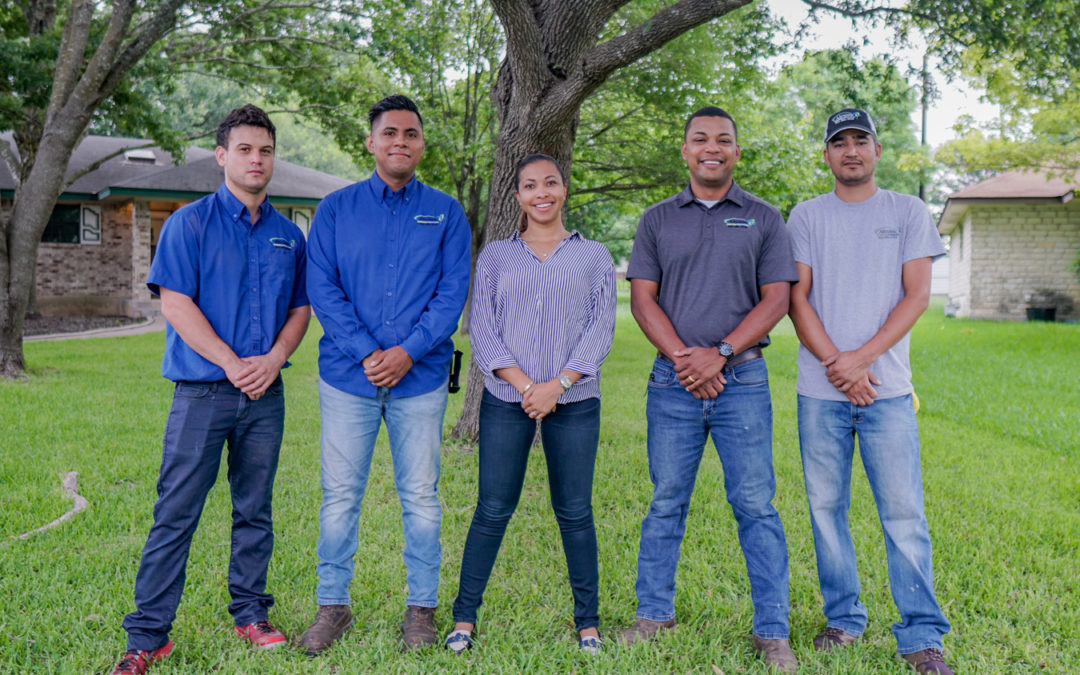 How did we grow our company to become Austin’s best local AC company? Putting pen to paper today has allowed me to chart these past five years and figure out what’s been the secret to our company’s growth.

Five years ago I would have never imagined we’d be employing a workforce, albeit small but mighty. Looking back five years, we were sleeping in a cargo trailer in the parking lot of an apartment. Why? Well, Les was living with his mom and I lived in an all-girls dorm in university with a roommate who was not a fan of guests.

Les was working as a maintenance “engineer” in an apartment complex downtown. He later tried out being a paramedic – too emotionally debilitating, then he went to nursing school. In nursing school he realized he would never achieve the quality of life he dreamed of as a nurse. So with that he closed his textbook in the middle of class, stood up, and walked out – That was the end of his nursing career. He went back to his roots of AC, which he had done years prior and began subcontracting.

Five years later, Les and I have our own company with over 600 clients spanning six cities.

Setting out, it wasn’t just the vision to do AC differently by putting the client first. Also, Les was tired of working in a role that left him unfulfilled moreover miserable. He started his business with just a beat up Dodge Dakota and that charming personality of his.

Half-of-a decade later, he brings that same personality to the job each day making both his employees and clients and me beam from the positive contagion. The secret to our company’s growth is not a 2000 Dodge Dakota – which we no longer have – or Les’ infectiously positive attitude.

It’s his dedication, now our dedication, to something bigger than us. We travel often, and every single trip we’ve been on thus far whether it was Brazil, Indonesia, Colombia, Trinidad and Tobago, Germany, or any of the other countries we’ve been guests of, Les has been on the phone either with his clients or with his employees making sure that his physical absence was not in any way impeding our company’s operations.

I remember specifically one trip, we went to Islas del Rosario, which is a remote island off the coast of Colombia. When I say remote, I mean they turn the generator to the island on at 8:00 pm and off at 12:00 am. Meaning there is no electricity on the island outside of those hours. They even ask you what you want to eat for the day in the morning. Then go out to sea in a dilapidated, but charming fishing boat to catch your breakfast, lunch, and dinner. There’s not even one car on the island!

Always a phone call away

While we were on the island one of Les’ clients tried to call him, of course the call failed – thanks remote island.  Her AC was acting up she said in a follow-up text to the failed call.

One important thing to note is that these past five years our company has grown only by word-of-mouth referrals. This particular client had sent a ton of new clients our way. Needless to say, Les was not going to wait until we got back to the mainland three days later.

We roamed the island to find the guy who controlled the generator. We paid him and then hunkered down in the room charging the phone. While simultaneously trying to find the spot with the best reception to call back our client. Les coordinated with our team to get someone to her home same-day. She was none the wiser of the logistical puppeteering going on behind the scenes to make sure we were present.

This instance is not an anomaly, there are countless examples of Les taking calls in quietish corners during Carnaval(es), on trains in France, from atop a volcano in Indonesia.

Luckily, for us and our clients, we’ve discovered online booking which makes both our lives more accessible. This doesn’t mean we don’t still answer the phone at 1:00 am in Indonesia because it’s 12:00 pm in Austin!

Our clients mean a lot to us. Because of them, we employ a great team, we work for ourselves, and we control our destiny. We are so dedicated to what we do because of our clients and the opportunities afforded to us. Our dedication is the secret to our growth.

What’s been the secret to your growth? Leave a comment sharing your secret.